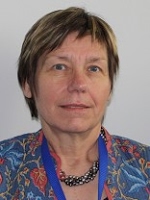 The 2nd WiN Honorary Award in 2014 is given to Dr. Gabriele Voigt, Director of Division of Safeguards Analytical Services, IAEA. The ceremony was in Sydney, Australia on 20th Octoboer 2014. Gabi gladly accepted the Win Global Award. Dr. Gabriele Voigt has been working in the nuclear field for several decades. After obtaining a PhD in biology, Gabi became interested in the transfer of radioactivity in the environment and in living organisms. Her expertise in this area motivated her to investigate some of the consequences of the Chernobyl accident. Amongst other important work, she also carried out a radio-ecological evaluation of the Semipalatinsk test site in Kazakhstan. She became a well-recognized expert in radiation protection.

At her home institute, the Gesellschaft fuer Strahlenforschung (Society for Radiation Investigation) in Munich, she carried out experimental work on the transfer and translocation of radionuclides in vegetation and validated the transfer model ECOSYS. With time, she assumed positions with increasing responsibility at the Institute. In 1999, Gabi became Professor at the Technical University of Munich and lecturer in radio ecology.

In 2002, Gabi joined the IAEA as the Director of the Agency’s Laboratories at Seibersdorf and IAEA Headquarters and was tasked with streamlining the Laboratories’ activities, which she carried out efficiently and effectively to the Director General’s full satisfaction. After the reorganization of the Laboratories in 2010, Gabi became the Director of the Office of Safeguards Analytical Services in Seibersdorf and the Programme Manager of ECAS (Enhancing Capabilities of Analytical Services for Safeguards), with a €80 budget for constructing new safeguards laboratories.

Gabi has received several awards from the IAEA, the American Radiochemical Society and the World Nuclear Association in recognition of her outstanding professional work and leadership. Gabi is an excellent communicator and demonstrates this skill on a daily basis. She has been instrumental in launching the WiN IAEA Newsletter, to which she contributes on a regular basis. She has also written a number of articles for WiNFO.

In addition, Gabi communicates on the advantages of nuclear techniques and applications in workshops and meetings with IAEA Member States and WiN Global chapters around the world. She has participated as a lecturer/speaker at several nuclear-related workshops. Owing to her many years of professional experience and personal intuition, Gabi has been a mentor for a large number of men and women, in particular from the WiN membership. Although she is a busy IAEA Director, she will find time to meet with people who need her advice and guidance.

Gabi is the Director of SGAS and has assumed a number of leadership positions in her professional life. In WiN, Gabi is the Vice-President of WiN IAEA and WiN Europe and a former Executive (now a Board Member) of WiN Global. She has excellent leadership skills, which are appreciated by her staff, by WiN IAEA and by WiN Global. She is integer and straight-forward and defends the rights of her staff. She guides WiN members to always give their best and to achieve the best possible results in their work.