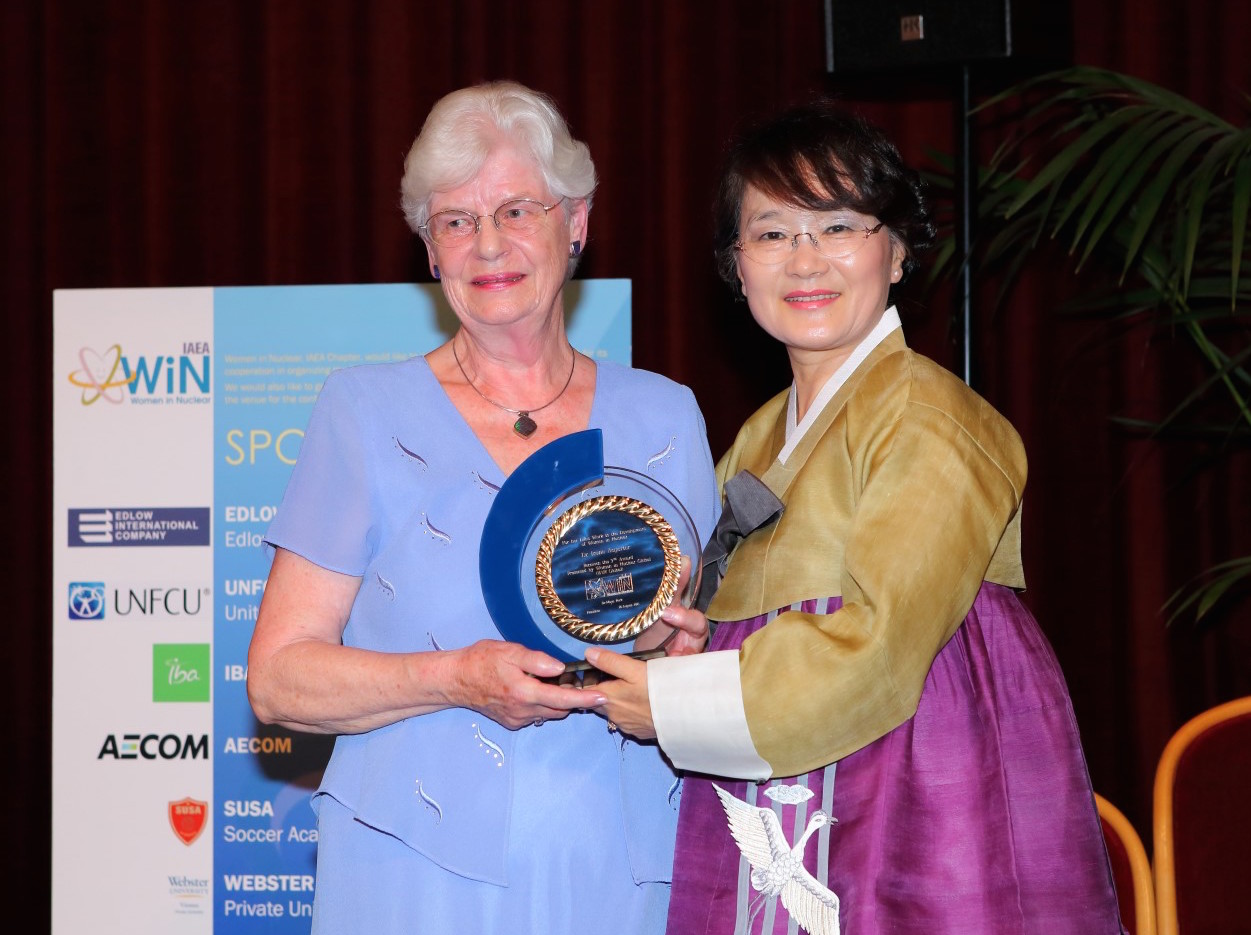 Dr Se-Moon Park (President WiN Global, Right of the photo) awarded Dr. Irene Aegerter (Left of the photo) as the third WiN Honorary Award Honoree during 2015 WiN Global Annual Conference held in the IAEA, Vienna, Austria on 23rd-28th August. Dr. Irene Aergerter is a staunch supporter of nuclear power in her home country Switzerland. After a post-doc in India, she worked for two years as a research assistant at the University of California. During several years of break for family reasons, she worked as city councilor. In the early 1980s she joined the company Gebrueder Sulzer as a professional for technical projects. She later became the Vice Director for communication of the Swiss Utility companies VSE in Zurich. She was a member of the commission for reactor safety from 2000-2008. In 2001 she became the Vice-President of the cogito foundation, which encourages the dialogue between science and technology on the one hand and humanities and the social sciences on the other hand. Since 2006 she has been the chairwoman of the Swiss Committee “Radiation Protection and Disposal”.

She founded the association “Women for Energy” in 1982. In 1992, she founded Women in Nuclear (WiN) Global and in 1995 WiN Switzerland. She is therefore generally referred to as “The Mother of WiN”.

For many years, Irene has been very active in communicating about the benefits of nuclear power in comparison to other energy sources. She is a well-recognized professional speaker and defender of Switzerland’s nuclear energy programme, fighting against the Government’s plans to phase out nuclear power. Irene studied physics, mathematics and astronomy at the University of Berne. She obtained her Ph.D. in 1966 and pursued post-doctoral studies in Bombay, India. Irene has demonstrated her leadership skills by her activities in many different areas: her first-time presidency of WiN Global, her presidency of WiN Switzerland, her vice-presidency of the cogito foundation, and her foundation of the association “Women for Energy.” During her working life and beyond, Irene Aegerter has mentored a vast number of women and men. She recognizes talent and through her mentoring empowers them to achieve their best.

Irene Aegerter has dedicated her life to the peaceful uses of nuclear energy, in particular for electricity generation. She is a well-recognized technical expert and her nuclear expertise has been in high demand at many top events and fora. As a nuclear safety expert, she has been a proponent of the upgrading of aging Swiss nuclear power plants to latest safety standards. She has successfully fought against the so-called “Energiewende” in Switzerland, i.e. the elimination of nuclear power from the country’s energy mix, by convincing people of the benefits of nuclear energy as a clean energy source.

Irene Aegerter is the “Mother of WiN Global” and she has been instrumental in turning the organization into what it is today. As a member of the Strategic Committee she further strives to enhance the operation of WiN Global in order to transform it into an even more professional organization.

Irene Aegerter has the gift of recognizing talents and she is never tired of mentoring promising young people in achieving their goals.

At the same time, Irene Aegerter has remained a very humble person, respectful of her counterparts and supportive of anybody in need. She has been a generous sponsor of WiN-related activities.

This award is a recognition of Irene Aegerter’s life’s work, for Women and Men in Nuclear, in Switzerland and on the global level. Without Irene, WiN would not be what it is today!