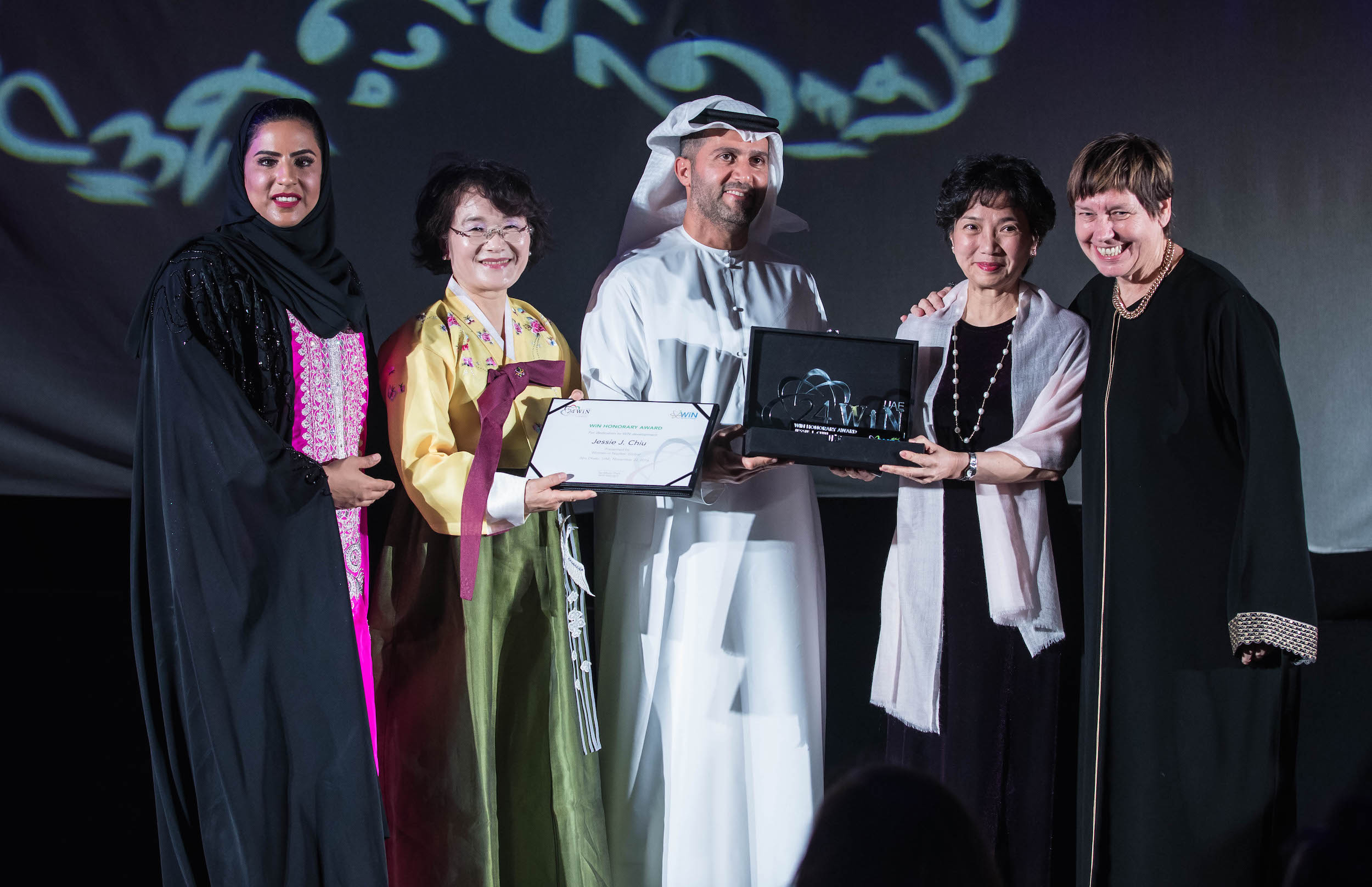 Dr. Se-Moon Park (President WiN Global, Second Right of the photo) awarded Ms. Jessie Chiu (Second Right of the photo) as the fourth WiN Honorary Award Honoree during 2016 WiN Global Annual Conference held in Abu Dhabi, UAE on 20th-23rd November. Mr. Mohamed Al Hammadi, CEO of Emirates Nuclear Energy Corporation (ENEC) (Center of the photo) hosted the Award Ceremony. Ms. Hasna Al Blooshi (Left of the photo) and Dr. Gabriele Voigt (Right of the photo) were together with the Award ceremony. Since 1993 Principal Engineer, Ms. Jessie Chiu was responsible for coordinating international cooperation activities and providing technical advice on various programs, including waste management, emergency response, environmental impact, laws and regulations, freedom of information, and public communication at the Atomic Energy Council in Taiwan. In addition she is executive supervisor of the Chung Hwa (Taiwan) Nuclear Society, steering committee member of the ANS Taiwan Section, member of the Chinese Geological Society in Taipei and the American Nuclear Society (ANS), and lifetime member of the Taipei Awakening Association, advocating women assisting women. Jessie attended the 1st WiN annual assembly in 1993 in Paris and became a member and immediately organized the WiN Taipei Chapter, and played the key role in organizing and hosting the WiN Global 1998 Conference at Taipei. Her communication skills are outstanding being able to bring together people of different cultures and providing information about the vast area of nuclear. With her language skills she helped bridging the gap between technical publics and laymen, especially women. Jessie Chiu received B.S. degree in geology from the National Taiwan University in 1976, and M.S. Degree in hydrogeology and engineering geology from the University of Illinois at Champaign-Urbana in 1979. Jessie had worked for the U.S. petroleum industry as well as the Federal Government for 12 years. During the six years with Gulf Oil and ARCO Oil and Gas, she worked on production engineering research and enhanced recovery in Venezuela, Texas, and Alaska. While with the U.S. Government, Jessie served as a team leader, unit chief and regional technical expert in the Environmental Protection Agency. Before returning to Taiwan in 1992, she was a program manager for environmental restoration in the Department of Energy.

She received a Bronze Medal for her outstanding leadership in rule making and implementation on hazardous wastewater injection restrictions. She was a leading Person during her two 6-year Terms in the Executive (1998-2004 and 2010-2016). She was a mentor for the young members of WiN Taiwan during the 23 years and was decisive that the WiN Taiwan Chapter had so many active members, who did participate in WiN global activities. She also served as role model outside the nuclear sector of Taiwan.