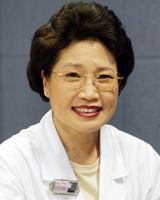 Dr. HyunSuk Suh, Vice President of Ewha Womans University and CEO of the Ewha University hospital, has long supported WiN-Korea since beginning. One of her contribution for nuclear field can be said that she had written articles during the subscription period of radioactive waste disposal site, which was hard time in Korea. She also had written many supportive articles of nuclear for the newspapers as one of opinion leader in Korea.

She graduated Ewha Womans University College of Medicine and was trained at Memorial Sloan-Kettering Cancer Center to become a radiation oncologist. After her return to Korea, her clinical work and research focused on radiation therapy of breast cancer. She was the pioneer in establishing the highly successful breast conserving treatment protocol which was unknown in Korea at the time. Three dimensional radiation therapy aimed specifically to the lesion was developed to prevent side effects such as skin discoloration and distorted figures of breasts for the first time in Korea as well.

In 1999, she was appointed as the Clinical Director and Head of the Department of Radiation Oncology at Ewha and the first Director of the Breast Cancer Center at Mok Dong Hospital. After serving as the Director of Clinical Research and Education and the Director of Mok Dong Hospital in 2005, she was appointed as the CEO of Ewha Medical Center and Vice President of Ewha Womans University in 2007 in recognition of her leadership and expertise in radiation oncology. Successful merging of DongDaeMoon Hospital and Mok Dong Hospital with a concise development plan for the medical center was possible under her leadership. The Ewha Cancer Center for Women was established and plays a leading role in the treatment of women’s cancer in Korea. Her management skills were evident once again by the contract with Seoul Metropolitan Government to oversee the management of Yangcheon Medical Center, Yangcheon Center for Dementia, Kang-Seo Dementia Center, and Yangcheon Mental Health Institute.

Vice President and CEO Suh has special interest in the gender difference in medicine and established the Academy of Gender Medicine in Korea. Her contribution to female medicine extends to the opening of the Clinical Research Center for Gender Medicine at Ewha Mok Dong Hospital to research the basic therapeutic approach to women’s diseases. She has reached out to the defectors from North Korea and around 30,000 non-insured workers from developing countries and has been providing medical care with love as service to the society.