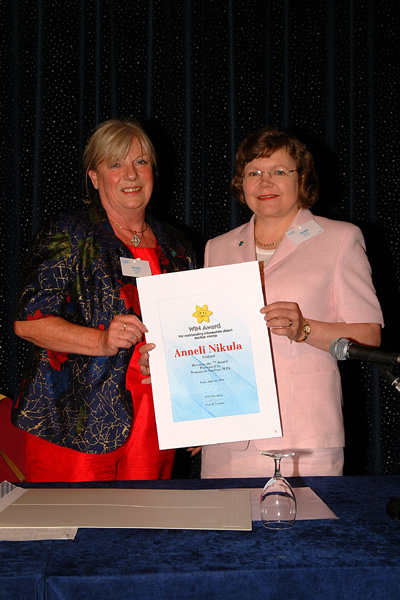 Ms Nikula has, besides her own work, been active in nuclear information issues. Through several public presentations and articles she has aimed at giving the public a good and correct picture of the nuclear field and to distribute information on issues connected to radiation.

Ms Anneli Nikula has had a key role in the process leading to TVO's application for the fifth nuclear power plant unit in Finland up to the ratification of the favourable decision-in-principle by the Finnish Parliament on May 24, 2002 by 107 votes for and 92 against. Ms Nikula has been working very actively both in her duty as Corporate Adviser in TVO and in her role as a coordination group member of WiN-Finland. Ms Nikula became the 'face' of the fifth unit via her several appearances in the Finnish media (tv, radio, press). However, besides and beyond being the 'front' , she has also been the driving force in many of the actions leading to this positive, and in the current European situation, exceptional result.

Ms Anneli Nikula is a radio chemist by education. She has Master of Science degree from Helsinki University. She has worked as a Research Assistant in the Helsinki University in the Radiochemistry Department, in Teollisuuden Voima Oy as a Chemist and as Section Head, and Senior Adviser in the IVO-Group in the Environmental Protection Division. She has also been Senior Adviser in the Finnish Energy Industries Federation in environmental and nuclear policy issues.