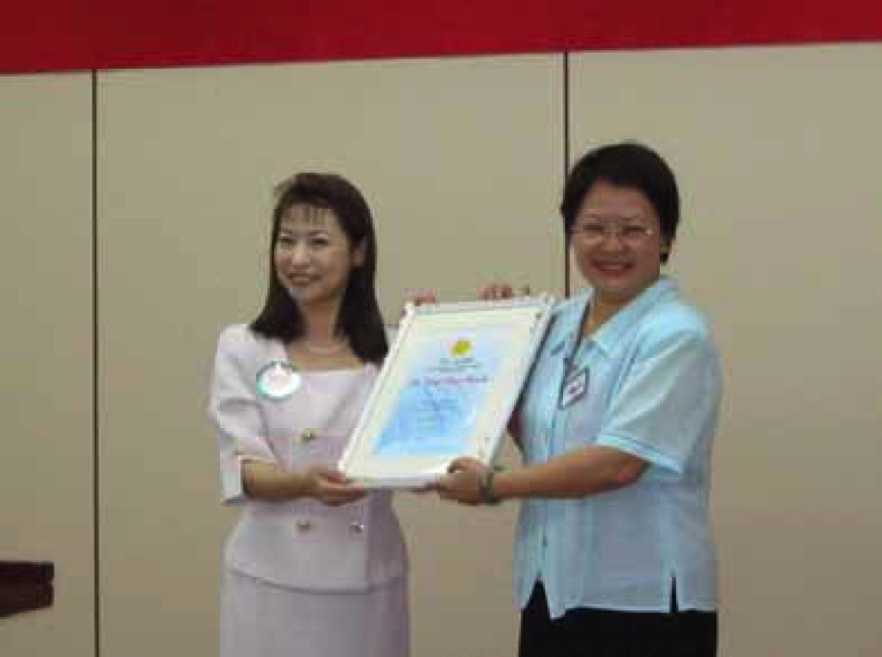 The 2004 WiN Award has been presented to Professor Ying-Chun Hsieh of the Taiwan National Chengchi University.

A non-nuclear professional, Professor Ying-chun Hsieh was recognized for her outstanding achievements in promoting science - including nuclear energy - by communicating with the general public using plain, easy to understand language, and for her strong, persistent and outspoken support of nuclear power.

Her engagement in promoting nuclear science and applications dates back almost 30 years, to the time when she worked for the "Science Monthly" magazine as Executive Editor, after receiving her MA degree in journalism from the NCCU.

In 1978 she was made Editor-in-Chief, but soon after went abroad in pursuit of advanced studies. In 1984 she received her PhD in communications from the University of Illinois at Urbana-Champaign, and resumed her role as Editor-in-Chief at "Science Monthly". At the same time she was working full-time as associate professor in the Department of Journalism at her alma mater, NCCU, and became a professor in 1991. In recent years she was also a visiting scholar at Kyoto University, the University of California at Berkeley, the University of Illinois at Urbana-Campaign, and at Beijing University.

Over the past 20 years Dr Hsieh has been involved in a various activities, besides her "official" academic career: supporting nuclear energy and promoting communication of nuclear issues, serving on the advisory boards of many nuclear power related committees dealing with reactor safety, emergency preparedness and legislation for waste management. She also trained NPP workers in how to communicate with local residents and lectured high school students as well as the general public. As a big promoter of communicating science - including nuclear energy - using basic language, she takes every opportunity inside and outside classrooms to teach students of journalism how to understand and report nuclear news.

Professor Hsieh became a member of WiN Taiwan a few years ago when she was invited to give a speech on "Public Communications and Nuclear Development in Taiwan - Stubborn Audience" at the 2000 WiN Taiwan Annual Meeting.

As the award recipient and the WiN president live "next door", WiN Taiwan and WiN Japan held an award ceremony in Taipei.

This took place on 1st October at the Taipower building in Taipei. In attendance were many WiN Taiwan members, the Vice President and some employees of Taipower, the Secretary General and other representatives of Chung-Hwa Nuclear Society (CHNS, the "mother" society of WIN Taiwan), Professor Hsieh's mother, colleagues and students.

In her speech WiN Global President Ogawa praised Professor Hsieh's achievements and said that Professor Hsieh gave guidelines to people involved in nuclear. Professor Hsieh expressed her appreciation of receiving this great honor, and thanked the people who had supported her for many years. She pledged to continue her efforts to promote nuclear.

As it turned out, holding the event in Taipei was an advantage as it enabled many people who had worked with Professor Hsieh to attend (usually the award is presented at the Annual WiN Global Meeting; however, in 2004 this was not possible).

The ceremony was followed by a panel discussion on "Communication of Nuclear Issues and Public Education". Four speakers from Taiwan and two speakers from Japan made presentations on their communication activities for nuclear power, back-end processing, nuclear safety, and other topics. The discussion generated practical ideas, and encouraged WIN members to initiate action.

Both, the award ceremony and the panel discussion, were held jointly by CHNS' Regulation and Education Committee and WiN Taiwan. The WiN award celebration dinner party was held in a cozy and historical house - Old City Mayor's Residence in Taipei. WiN Taiwan and WiN Japan members very much enjoyed the occasion which was like a family meeting of many sisters full of smiles and cheerful talk.

On Monday, 4 October 2004, two articles appeared in "The Liberty Times" - one of the top three daily newspapers in Taiwan.

The first article reported the visit of WiN Global President, Junko Ogawa, and her WiN Japan delegation, with special focus on their meeting with Dr. Min-shen Ouyang, Chairman of the Atomic Energy Council. As there are strong anti-nuclear forces in Taiwan which have increased public awareness of nuclear safety, Ogawa stressed the importance of continuous and persistent communication. She suggested that WIN Taiwan should take an active role in communicating with residents near nuclear facilities, and serve as a bridge between these residents, anti-nuclear groups and the government. Good and frequent communication, such as round-table discussions, would improve public understanding of nuclear power operation and alleviate conflicts.

The second article reported the WIN Award ceremony on 1 October. The headline read "Highest Honor of Global Women in Nuclear Awarded to Professor of Journalism", with a photo of Professor Hsieh. The article covered a brief introduction of the award recipient with citation of her specific achievements, an introduction of the WiN Award, WiN Global and WiN Taiwan.

WiN Taiwan members, including Professor Hsieh and her colleagues, and the WiN Japan delegation were fortunate to see the various facilities under construction, and to step into the coolant water discharge tunnel as well as the visitors' center.

There are three operating NPPs in Taiwan. Planning of the 4th NPP (two ABWRs) started in 1980. The first budget was approved by legislators in 1994, and completion of reactor 1 was due in 2006, reactor 2 in 2007. But construction is now behind schedule, due to a 3 1/2 month suspension after a reevaluation in late 2000 and continuing concerns of anti-nuclear activists in Taiwan.

Taiwan needs more effective and efficient communication activities such as WiN Taiwan has contributed. We strongly hope that construction proceeds smoothly without any interruptions, and that the plant starts its operation soon.

WiN Taiwan is well known as one of the oldest WiN groups. It was established in 1994 as WiN Taipei, then changed its name to WiN Taiwan in 2003. Seven executives and 100 members bend their energy to various communication activities.

Many WiN members will remember that in 1998 WiN Taiwan organized an excellent first WiN Global Annual Conference outside Europe.

WiN Global much appreciates the eagerness and efforts of WiN Taiwan and its members for making the 2004 WiN Award ceremony and related events a truly memorable experience.