WiN Award 2005 for Outstanding Information on Nuclear Energy to Anne Lauvergeon, Chairman of the AREVA Group

Today, the civil nuclear industry appears to be poised for worldwide expansion. Rapidly growing global demand for electricity, uncertainty over future supply and availability of fossil fuels, their soaring prices, concerns about air pollution and climate change abatement measures are all forcing many nations to consider a place for nuclear power in their energy policies. However, there still exists scepticism about the advantages of nuclear energy. This is why women with visibility and credibility are key to gaining public acceptability which is so essential to the successful further deployment of nuclear energy worldwide. 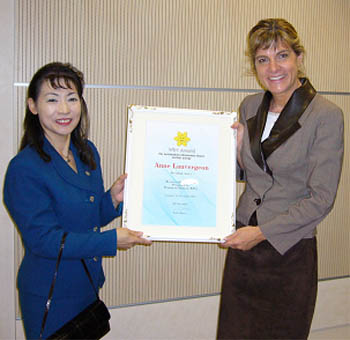 Using generally recognised feminine values, women working in the nuclear and radiation sector with relevant expertise can explain more complex issues surrounding the use of nuclear technologies in terms that others can understand.

We, professional women in nuclear industry, can play a crucial role in revitalising the industry's image, in giving it a new humane face. We need to reach out to others and convey our confidence, passion and commitment to future success.

One of our tasks is also to bring round to our side those bright and influential women working in politics, the finance sector and in the media whose support we need so much these days.

Successful women, in what is regarded as a male-dominated industry, also act as role models for younger women. Attracting capable and ambitious young professionals to our field is one of the major issues we have to address if we are to face the challenges of the nuclear renaissance. And we should ensure that the role of young women in the industry's future development is not underestimated.

Therefore, this year WiN Award goes to a woman who exemplifies all these WiN goals, to a woman whose name represents strong willpower and breathtaking achievement, to a woman who controls the largest nuclear company in the world. She has unarguably already contributed to the change in the industry's image, starting with the rebranding of her own company, which is now seen as an example of success and prosperity. She is indeed a role model for any woman in the field and for any young professional to look up to.

Anne Lauvergeon graduated from the French National School of Mining Engineers ("Ecole des Mines”) and the French “Ecole Normale Supérieure”, and holds a degree in physics. She started her professional career in 1983 in the iron and steel industry. In 1984, she directed the European safety studies for the chemical industry of CEA (Commissariat à l'Energie Atomique). From 1985 to 1988, she supervised the underground mining utilities' activities and in 1988, she was appointed Deputy Director of the General Mining Council.

In 1990, she was named Advisor for Economic International Affairs at the French Presidency and Deputy Chief of its Staff in 1991. At the same time she became "Sherpa" to the President, in charge of the G7 Summit's preparation. From 1995 to 1999 she held senior executive posts at Lazard Frères & Cie and Alcatel Telecom.

From June 1999, Mme Lauvergeon was appointed Chairman and Chief Executive Officer of COGEMA, and since July 2001 she has been Chairman of the Executive Board of AREVA.