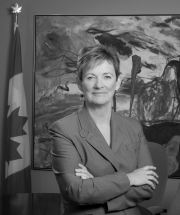 Linda Keen deserves to be recognized for her outstanding achievements in leadership in her promotion of Women in Nuclear, in her communications with stakeholders, nationally and internationally on nuclear matters, through her role as Past-President of the Canadian Nuclear Safety Commission (CNSC), and in mentoring and supporting those seeking professional development in the industry.

Linda Keen has been involved in the nuclear power industry for many years, and has made an extensive contribution to the promotion of nuclear power, and to the safety and security of the industry. Defining her career has been her leadership abilities in diverse areas: world-class science laboratories, international market development, sustainable development and trade policy or regulatory agencies where she pioneered the development of new expertise.

She has been at the forefront of communications-with the public, with industry, with her employees and with the people that she mentored, especially women.

She was for seven years the President and CEO of the Canadian Nuclear Safety Commission, having previously led organizations in mining and minerals and in agriculture and agri-food. She co-chaired the Canada-US Task Force investigating the nuclear component of the Eastern Electricity Blackout in 2005; she led the Natural Resources Canada group to privatize the Cape Breton Coal Corporation; and she directed the business plan for the CANMET Mining Laboratories which resulted in moving to extensive cost recovery and obtaining the ISO 9001 designation.

Linda was elected as the first Canadian President of the International Nuclear Regulators Association and of the International Atomic Energy Agency’s Nuclear Safety Convention. She was a founding member and first President of the Heads of Federal Administrative Tribunals and an active member of the Conference Board of Canada’s Public Governance group. She is currently a director of the Canadian Council of Administrative Tribunals and a member of the fundraising Cabinet of the Ottawa Hospital. She is a nominee for the 2008 International Woman of the Year for the Nuclear Industry award.

Linda Keen is a leader of science and technology-based organizations, with extensive experience in the nexus of private sector, government (including regulatory and market development aspects), and stakeholder interests - within Canada and internationally.

Linda has a B.Sc. (First-Class, Chemistry) and a M.Sc.(interdepartmental studies in Food Science and Marketing) from the University of Alberta. She is fully bilingual in French and English, with a working knowledge of Spanish.