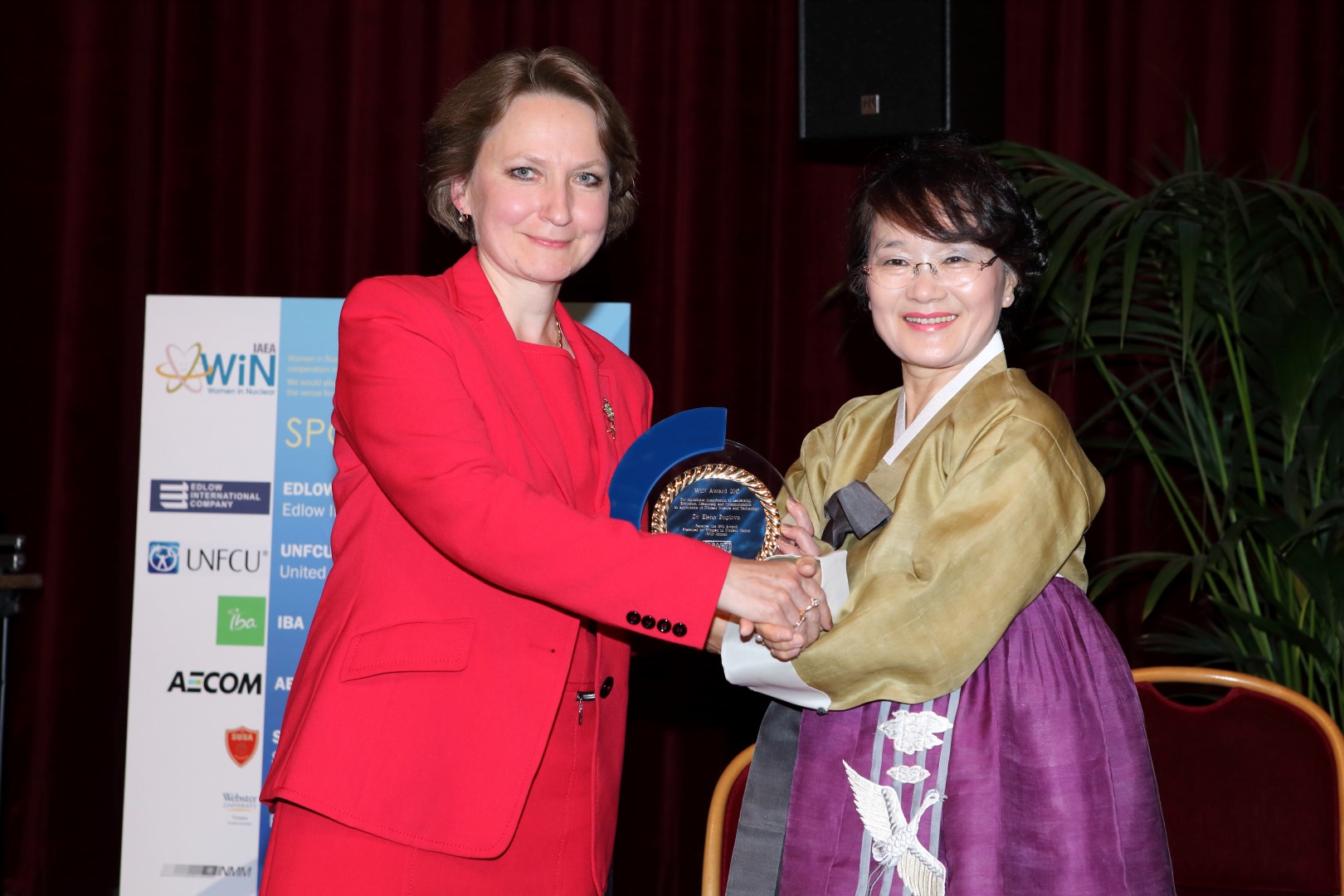 Dr Se-Moon Park (President WiN Global, Right of the photo) awarded Elena Buglova (Centre of the photo) as 2015 WiN Award Honoree during 2015 WiN Global Annual Conference held in the IAEA, Vienna, Austria on 23rd-28th August. Dr. Elena Buglova is the Head of the IAEA Incident and Emergency Centre (IEC). She obtained her professional experience in dose reconstruction and emergency preparedness and in radiation protection in Belarus after the Chernobyl accident. In this context she was involved in the reconstruction of thyroid doses of children and epidemiological studies on the impact of the Chernobyl releases on the Belarus population. Before joining the IAEA in 2002, Elena was working as the Head of the Laboratory of Radiation Safety and Risk Analysis at the Institute of Radiation Medicine of Belarus in Minsk. She was involved in the development and justification of criteria for protective actions in Belarus after Chernobyl, risk assessment of radiation-induced health effects and in updating the national emergency plans based on the Chernobyl experience. Since 2002 she has been working on IAEA standards, guidelines and tools in emergency preparedness and response, on capacity building in Member States as well as on the IAEA's in-house preparedness. She was appointed as the Head of the IEC in 2013. Her in-depth experience was specifically helpful after the Fukushima accident when she became heavily involved in evaluating the consequences of the accident.

After Fukushima Elena Buglova participated in many meetings and press events in order to provide objective information about the consequences of the accident and she became a well-recognized international expert in emergency preparedness and mitigation. She is continues being in contact with IAEA Member States and their emergency centers which report any radiation incident to the IAEA.

Elena graduated with an MD in Medicine (with honours) during a time when her immediate environment was being heavily influenced by the effects of the Chernobyl accident. Spurred on by a desire to serve the population and to do the best to protect it, she continued her studies gaining the credentials of being a Candidate of Medical Science (Ph.D & M.D), in the field of Radiation Hygiene and later a Doctor of Science, through her deep scientific research work within a newly established Research and Clinical Institute of Radiation Medicine and Endocrinology in Minsk, Belarus. She also studied in Germany, France and US to deepen her scientific knowledge.

Elena was the Vice-President of WiN IAEA from 2010-2014. She was instrumental in the preparative work for WiN Global 2015 and she is a standing member of WiN IAEA’s preparatory committee. Despite a heavy work schedule, Elena Buglova has mentored many young female professionals and helped them to achieve their goals. She has motivated IAEA interns and staff members to join WiN and has provided guidance for their further carriers.

Ms. Eva Gyane (President WiN IAEA) said "Ms Buglova is a role model of successful females in leading positions who combines work and family life. She has thereby motivated specifically young women to pursue a scientific carrier without giving up their family obligations. The WiN IAEA chapter members are convinced that she well deserves this distinguished award as an acknowledgement of her work for WiN and the role Women in Nuclear can play in an international organization."