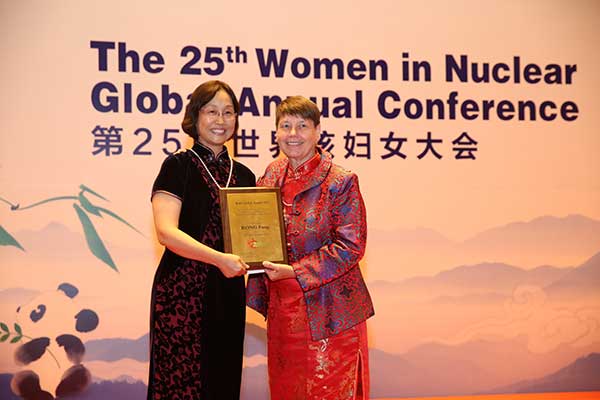 2017 WiN Award is given to Mrs. Rong Fang. Mrs. Rong Fang, born in 1963, is a professor level senior engineer. Her bachelor’s degree was obtained at the Southeast University in Structural Engineering and her master degree in Business Administration at the Harbin Institute of Technology. She has a long professional career serving the China National Nuclear Corporation (CNNC) and State Nuclear Power Technology Corporation (SNPTC) where she served in different high-level positions. Since 2016 she is the Chief Economist of SNTPC.

She is an excellent strategic thinker and provides strong leadership for not only WiN China but for women working in China’s nuclear sector at large: A role model and mentor for young females to obtain excellence in performance and pursue career. She emphasises on training, tutoring and education of her subordinates specifically women. With her leading positions in the according organizations she was able to promote and upgrade China’s nuclear industrial capabilities and capacities and to facilitate business of major import and export projects. Teams under her leadership have been recognized as ‘united and aspiring’. Her achievements have been acknowledged by international organisations such as IAEA, WANO, WNA and IYNC among others

Since 2013 Rong Fang is the Executive Secretary of the Chinese Nuclear Society Women in Nuclear Committee. She promoted and implemented committee work, encouraged and facilitated women to participate in nuclear activities, and strengthened and expanded the international cooperation and communication between Chinese women in nuclear. With the efforts of Mrs. Rong Fang WiN China was revitalized and returned to WiN global in 2014 after 8 years of reduced activities. She was also the driving force behind the organization of the 25th WiN global conference in 2017 held in Beijing China and ensured that the conference was a full success.