The 19th WiN Global Annual Conference was held at the Riviera Holiday Club in Varna, Bulgaria from 6th to 9th June 2011. We, as organizers and hosts of the conference, happily welcomed more than 160 WiNners and other participants from 24 countries ail over the world. The conference was organized under the patronage of the Minister of Economy, Energy and Tourism of the Republic of Bulgarian Nuclear Regulatory Agency (BNRA), Bulatom and Kozloduy NPP Pic.

The theme of the meeting was 'Nuclear Technologies-to build a better world' and included 43 reports in four technical sessions:

The focus in the technical programme was the special technical session dedicated to the Fukushima Daiichi event presented by Junko Ogawa and her colleagues who communicated their message and lessons learnt to the WiNners. More than fort y papers were presented during the conference - 28 oral presentations and 17 posters. Ali the papers demonstrated the active involvement of the women in the use of nuclear energy. They also showed that many of the women are highly experienced and occupy important positions in the industry.

The other significant part of the meeting included the General Assembly that was held, the Executive and Board meetings conducted and last but not least, the presentation of the Country Reports from 20 countries introducing the experience and the activities of the different WiN Chapters 50 that we could successfully import, gain, learn and share not only what we have done, what we are currently doing but what we are planning to do in the future as well.

The tradition of the generous contributions collected from the attendees was continued and this year the donations were unanimously decided to be given to WiN Japan to find the best and most appropriate way to use them.

The WiN Global Award for 2011 was given to Mrs. Hrisitna Kremenlieva, who is working for the Bulgarian Nuclear Regulatory Agency and who is the first woman reactor operator in Bulgaria for her significant contribution, excellent communication, leadership and mentoring skiIls in the field of nuclear power engineering and also for being one of the founders of the WiN Bulgaria Chapter from the very beginning.

The WiN Global flag was handed over during the closing ceremony to the representatives of the next host of the conference in 2012 -WiN Sweden.

Fort y two participants visited the Kozloduy Nuclear Power Plant during the technical tour and some of the WiNners had also the opportunity to see the old capital of Bulgaria- the town of Veliko Tarnovo at the cultural tour. 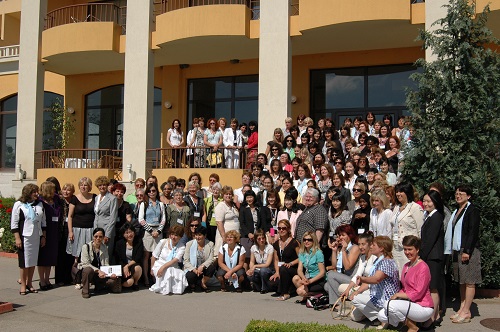